You can find us here:

Check me out on: 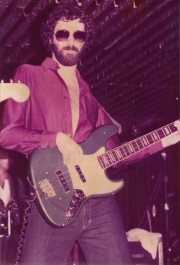 Look for the new single called "GURL'S GOT ME HUMMIN" by AL DOC BERGER'S NIGHTHEAT ON YOUTUBE.

Work is continuing on the second video and will be shot in the near future.

We are happy to present to you our new Internet site.

Here, you can find announcements about us and what we're up to.

Join in!
We always enjoy getting to know new fans and musicians. Or Are you interested in learning music? Then what are you waiting for? Contact us!

Check out the new single on iTUNES called "CRYIN, CRYIN"

CHECK OUT THE FIRST SINGLE "MUDER DONE UP" ON YOUTUBE﻿

Al Doc Berger has finished his new studio cd album entitled ADDICTED TO HEAT by AL DOC BERGER'S NIGHTHEAT. The cd album can be purchased right now on EBAY at DOC'S VINYL RECORDS AND BOOK SALES, or click the eBAY button in this site, and the album is ready to download from iTUNES, eMUSIC, NOKIA,AmazonMP3,Spotify, iHEARTRADIO, and many more eSITES now. There are 18 songs including poprock, blues, country, reggae, and gospel. SOUTHSIDE JOHNNY,SPRINGSTEEN, BON JOVI, and Jersey fans check it out.

The cd album ADDICTED TO HEAT contains the first single entitled "MURDER DONE UP" and is now released to YOUTUBE as a free demo sample video. Click on the youtube link on the left side of this webpage. Written & produced by 'the Doc'-and directed by 'Doc' and Peter Theilen. Also, video production work has started for the 2nd single ,"Tough Love", from the album.

There is a 6 song ADDICTED TO HEAT sampler now up on YOUTUBE that includes: "Murder Done Up", "Tough Love", "Fire Is Never Gentle", "Soul River", "Ancestral Aches", and "Works (What's Going On)".

Recording has started on the second cd album for AL DOC BERGER'S NIGHTHEAT and there are 4 songs 'in the can' for that project.

Also in related music news, Al Doc Berger has contracted with the music school ALL ABOUT MUSIC to teach a specialized bass lesson class entitled AL DOC BERGER'S TRICKS OF THE TRADE (GROOMING FOR THE CONCERT STAGE AND PREPARING FOR A CAREER IN THE RECORDING STUDIO). Call (352) 686-7297 for details.